The study of geometry and structure of solids is a science known as crystallography. X-rays and microscopes have substantially contributed to this area.

A metal may behave as amorphous, and a non-metal can exhibit crystalline nature under specific conditions.

Silica, a non-metal, takes on the crystalline form as quartz and amorphous form such as silica glass. The high density polyethylene (HDPE), another non-metal, is almost crystalline due to its long aligned molecular chains.

Crystalline form of solid has periodically repeated arrangement of atoms. But the solids in amorphous form do not have long range periodic repetition. However, in both of the above forms, the coordination number is almost the same.

Formation of amorphous structure is characterized by several factors enumerated as below:

Several factors responsible in the formation of amorphous state are:

Poor secondary bonding force: It does not allow formation of straight and parallel molecular chain during solidification of the solid from molten state.

Comparison  of Crystalline and Amorphous Solids

Whereas an amorphous solid

Materials, on the basis of their structure, may be classified into two groups viz.

Generally metals are crystalline, and non-metals are amorphous. But this is not a rule. Plastics a non-metal may be obtained in almost crystalline form.

Crystalline solids have periodically repeating arrangement of atoms. Such solids can be further sub-classified as follows:

Most of the materials in engineering applications are polycrystalline.

The smallest visible part of a material is made up of large number of crystals. These crystals may be of different shapes and sizes. They generally have random orientation.

A space lattice is defined as an infinite array of points in three-dimensional space in which each point is identically located with respect to the other.

Concept of space lattice is helpful in understanding the crystal structure of existing materials, and also those materials which are likely to be developed in future.

In above Figures, a and b are the fundamental translation vectors, and c is generated vector. If points are located such that a = b, the arrangement will be known as square lattice.

If location of the points is such that a ≠ b then the arrangement will be called rectangular lattice.

Figure (iii) shows an array on the front plane, right side and top planes. These may be called square or rectangular array on the basis of geometry whether a = b or a ≠b.

The smallest unit formed by joining these identically spaced points is referred to as a unit cell. One such unit cell, shown in above figure, may be cubical or non-cubical depending on the dimensions of translation vectors.

A unit cell may be conceived from its geometrical vectors a, b and c, or as marked by A in Figure (iii).

The way of filling-up of points in a space lattice by the atoms is known as Basis.

Each point may be occupied by one, two or many atoms in different solids. The space lattice when combines with the basis generates a unit cell.

Similarly the unit cell will be known as multi-atomic when too many atoms occupy a lattice point. These types of unit cells are shown in following Figures.

Here the atoms are shown separated from each other for clarity, which in actual materials are not separated. In diatomic and multi-atomic unit cells, the center of larger atom coincides with the lattice point.

The basis for some materials are given as follows: 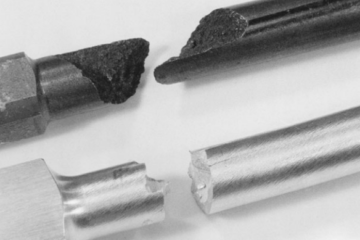 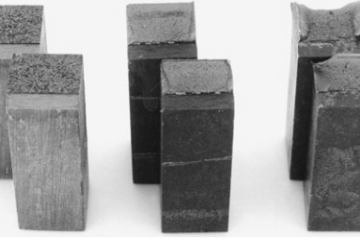